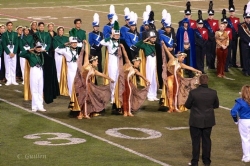 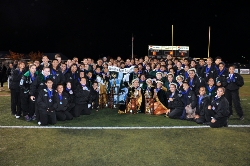 “They had the show of a lifetime with all the passion and emotion that it takes to pull off winning the state championships,” Pollock said. “It proves that consistency, lots of discipline, and love go a long way to accomplishing ones goals.”

Everyone was anxious as the awards were presented, with Nogales winning all of the individual competitions to take the gold and the memory of a lifetime.

“Hearing Nogales High School Noble Regiment 1st place announced in that stadium in front of tons of people brought tears to my eyes, alumni, and the parents that showed to support the ‘Little Band that Could,’” Pollock wrote in an email.

The Director thanks students and staff at the Rowland Unified high school (Nogales High School) for all their support. “We were all in this together,” he said.

Pollock added that his musicians were also complimented all weekend at the hotel by other bands and strangers, on how well behaved, professional, disciplined and courteous our kids were. He noted the Noble Regiment also uses a few eight-graders from Telesis Academy and Giano Intermediate School.

“I can honestly say that there are no 8th graders in the country playing the music we did and marching at the highest level anywhere. They were all simply amazing,” he concluded.